What You Need to Know about the Asian Giant Hornet 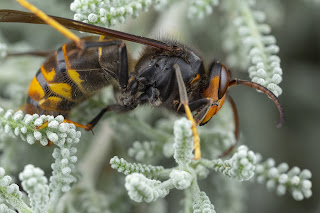 Various articles and memes have been circulating social media involving the Asian giant hornets (Vespa mandarinia), which have recently come to be known as “murder hornets”. These articles report that the Asian-based hornets have made their way to the United States, causing concern across the nation.

The Asian giant hornet is the world’s largest at roughly two inches long in length. It has a distinctive black tooth used for burrowing. Its stinger is also very large at about a quarter inch in length.    The concern regarding these hornets is certainly warranted as they do pack a painful sting. Scientists are currently working on locating these wasps and prevent their spread across the US.

The hornets have become infamous on the internet, but this news was originally shared with the public to increase awareness. In the state of Washington, where a couple of spotting’s of these hornets have occurred, information regarding these citing’s was shared to ensure the public would keep a look out for and report any possible nests. The reason we do not want the Asian hornets in the U.S. is due largely in part because they eat and kill honeybees and can be a threat to the honeybee population.

The good news is the Asian giant hornet, a non-native species in the United States, is not found in Texas and the reality of this being a concern for Texans is rare. In fact, mosquitoes, bees and yellow jackets can be more of a concern when it comes to bites & stings. If you are stung by a bee, wasp, or hornet, you can do the following.


If you think you have been stung by a bee, wasp, or hornet, contact the Texas Poison Center Network at 1-800-222-1222 for treatment advice. If you are having an allergic reaction that includes difficulty breathing dial 911.  The poison center is available 24 hours a day, 7 days a week to help. For more information on the Asian giant hornet visit https://www.nationalgeographic.com/animals/2020/05/asian-giant-hornets-arrive-united-states/ and for more information on bites and stings visit the Texas Poison Center Network’s website at  www.poisoncontrol.org.

Posted by Texas Poison Center Network at 10:43 AM No comments: